The end of August really annoys me.

It’s not so much that September is around the corner and the next step means back to school. Although I do work for a university, I’m on an administrator’s schedule, so September is no different for me than July. And I genuinely enjoy the changing of the seasons. It’s just that the end of August is so sudden about it.

Consider the transition from fall to winter. When does that happen? No set time. There can be snow on Halloween and t-shirt running weather on Christmas. The leaves take forever to come down. Week after week of raking. The township makes leaf pick-ups from November 1 through December 10. There’s a gradual building up to the holiday madness from September on; the winter solstice doesn’t take anyone by surprise.

And consider February. I’ve always thought that February gets a bum rap as the dreariest month. In fact, February has as many daylight hours as October. It’s just that nobody notices. And the first snowdrops come up in February to make way for crocuses in March. All giving us time to prepare for April and the early forsythia and daffodils before there are even any leaves on the trees. So when did winter end?

In late April we might put in the screens on the side porch and get out a couple of chairs. Three weeks later we might retrieve the grill from the garage, then wait another week before planting the impatiens. And we can even wait another week or so before we buy the hanging baskets for the front doorway. Summer comes that gradually.

But the end of August slams into summer like a hurricane making landfall. No subtlety about it. Almost overnight the world seems to go from daylight and birds chirping at 5:00 to dark silence as late as 6:00 a.m. In my morning run, I’m loping past the tidy landscapes of Plush Mill Road when I smell it: the pungent odor of decaying leaves. The impatiens that were perky just a few weeks ago now look sallow, with snubbed nodes on their stems instead of incipient buds. Recognizing the inevitable, I’m tempted to stop my rounds of watering. Why bother? Can’t stop the decline now! 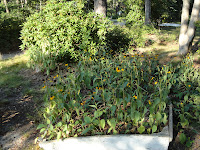 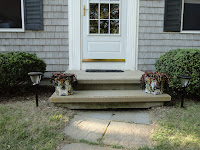 Take the last couple days. We arrived on the Cape Thursday afternoon, having left only 10 days before. The end of August had done its damage here as well.

Our planters and baskets of flowers that had thrived all summer through extended absences and benign neglect now look like props for the Addams Family, dead stems collapsed over the sides of their containers. Our neighbors returned to Albany only a week ago, yet their black-eyed-Susans that had reigned in glorious sunny gold for three months now stand stiff with nothing left but charred tops. Although the thermometer said it was 82°, an undercurrent of chill raised the hair on my forearms and Jon wanted to know if he could build a fire. The scrub trees edging the pond are pock-marked with leaves the color of dried blood, and at our favorite farm stand pumpkins are pushing aside the peaches. There is no more reading on the deck until 7:30 p.m. -- we can’t see the pages of our books. And we have to turn on the lights to eat dinner.

All of this change in 10 days.

In defiance of the end of August bearing down on us, tonight, August 31, Jon and I put a steak on the grill, boiled up some corn, and had a salad with native tomatoes. Afterwards we walked down to the landing of the pond. The breeze was now soft and the moon was shining so brightly that the water shimmered silver and we could see our shadows.

The moon wasn’t really blue, but we were. Good-bye, summer. 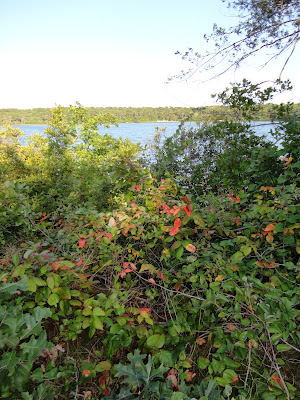 Posted by Kathryn Taylor at 6:30 AM

Email ThisBlogThis!Share to TwitterShare to FacebookShare to Pinterest
Labels: General

Kathryn Taylor
Kathryn Taylor has been a teacher and a banker, and is currently Director, Alumni Affairs and Communications, at Princeton University. She has always wanted to have a weekly column. She and her husband live outside Philadelphia; her two children, who make regular appearances in her essays, are all grown up now.